Last week, while we were at the grocery store, I had a craving for pecan pie. I suggested getting some to the hubby, but since we were already picking up another dessert, he dissuaded me. Later that evening, as we were putting groceries away, PK kept saying "Want pecan pie! Want pecan pie!" It was pretty funny, because as far as I know, she'd never tried pecan pie before, but she was dead set on having some. I told her that we didn't have any. She wasn't terribly upset over it (i.e. no tantrum - yay!), but kept asking about pecan pie all week long. So I decided to try to bake one myself.

I got the recipe from a Williams-Sonoma recipe book that the hubby had gotten me a few years back. I typically don't bake things like pies and cookies because of the high butter content. I try to stray from the super-buttery desserts (even though they taste soooooooooo good), and when I do bake desserts that require butter, I often substitute the butter for canola oil. This usually works if the recipe calls for melted butter (like the tea biscuit recipe that I have, or the banana bread that I make). Obviously this doesn't work for pound cake. I've tried substituting canola oil for butter in chocolate chip cookies. The end result is pretty tasty (in my opinion, at least), but you definitely don't get your typical soft, moist chocolate chip cookies by making such a substitution.

Well, this time, I followed the recipe to the letter, and even avoided making substitutions (like replacing corn syrup with maple syrup). Believe me, I make substitutions all the freaking time when I bake. Kind of drives the hubby crazy, though at least he likes most of the stuff I bake in the end. Anyway, I ended up with so much extra dough and filling that I wound up baking two pies.

The next day (my baking usually takes place late at night), I showed PK the pecan pie that I had baked for her. As soon as she saw it (I hadn't told her what it was), she exclaimed, "Pecan pie! Want pecan pie! Want pecan pie!" So I gave her a piece. She was so excited to try her piece. And then she tried it. And didn't like it. Her exact words were, "No like it." Arrrgh! Fearing that this pie turned out horribly, I decided to try some and loooooooooooooooved it. So did the hubby.

I'm a bit disappointed that PK didn't like the pecan pie, but I'm not entirely surprised by it. I don't think that she's a huge fan of nuts (I tried to give her some slivered almonds and she totally didn't go for them). I think in due time she'll learn to appreciate pecan pie, but until then, the silver lining is that there's more for us! 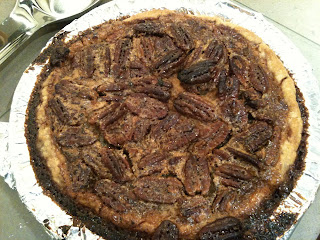