Last night, after PK went to bed, I opened up the package containing PK's violin. Although the package was really really light, it did, as promised, contain a teeny violin in its case, along with a bow and some rosin. I still can't get over how tiny the violin is. It seriously looks like a toy. But don't be fooled, because it plays just like a full-sized violin, except squishier.


When I opened up the box, the violin's strings were all loose (probably a good thing), the bridge was not on (but was tucked away inside the case, thank goodness), the G-string (okay, make your jokes now) was completely off, as was the accompanying peg.

I've never strung my own violin, and when I first got it, the first two times that I tried tuning it resulted in broken strings. I could've probably waited to take it to my violin teacher to string and tune it, but I'm both impatient and stubborn, and clearly I am a glutton for punishment. Fortunately, my tuning and stringing attempts did not result in broken strings. That being said, the bridge snapped off about a handful of times. Fortunately, it didn't break.

Tuning the damn thing proved to be a pain. I have a tuner, so that obviously helped, but the friggin' pegs kept slipping, so whenever I thought I had a string tuned, the peg would end up turning on its own, and my newly-tuned string would end up out of tune. Either that or the bridge would come off, and I had to start everything all over again. By the end of it, my fingers were totally sore. I think it took me a good hour to tune the thing.

Alas, I did prevail in the end, and PK now has a functioning violin. Here's to hoping that she actually plays it... 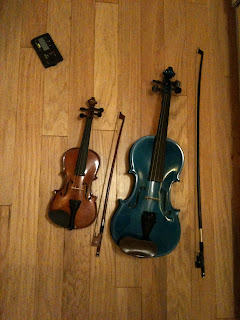 Momma and baby violins.
Posted by IndyComp0T1 at 11:34 PM