A Day at the Zoo

On Saturday, we took PK to the zoo. This has been our fourth trip with PK since she was born, and it has definitely been our most memorable one. We went on our little zoo trip with a family from Venezuela. The story of how I met them is pretty over-the-top (as far as my boring life is concerned, anyway).
On the day of PK's second visit to her soon-to-be new Montessori school, we went to the subway 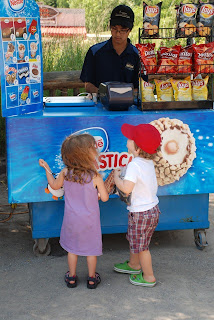 on our way to her daycare, as usual. We got on the elevator on our way to the track level, just as another mom and her little boy got on as well. The boy looked to be about PK's age. He caught her attention because he was having his milk in a bottle. PK, who is a hit-and-miss milk drinker, immediately wanted some milk too. Fortunately, I had her morning milk on-hand (not in a bottle, mind you...we ditched the bottle before she turned one). It turned out that we were both heading the same direction, and ended up hopping on the same subway car. PK, being fascinated with the little boy, wanted to sit facing him.
I chatted with PK in Portuguese, as I usually do. The other mom spoke with her son in Spanish. She overheard me, and started making small-talk. After chatting for a while, we realized that not only did we live close to each other, our kids were both going to be attending the same Montessori school in the fall. Their birthdays are just a month apart, with PK's being on August 6th and his on September 6th. The two look a LOT alike, right down to curls, skin complexion, and hair color. Definitely one of the crazier coincidences in my life. Though our kids didn't currently attend the same daycare, it was funny that we got off at the same subway stop. That was enough cosmic coincidence for me. We exchanged e-mail addresses and phone numbers right then and there before we parted ways.
G, the little boy, made quite the impression on PK. Though they've only seen each other a couple of times, PK talks about him all the time. Apparently, G talks about PK too. Before our zoo trip, we got together to go for some ice cream at one of my favorite ice cream places (they have home-made ice cream and cones...soooo good). The kiddies had a blast, and G even brought a little toy car for PK to play with.
After that, we made a playdate to go to the zoo together. I was a bit weary of the zoo trip, to be honest. While I like to have playdates for PK, every weekend has been super-busy with one playdate or another. That, coupled with swimming classes every Saturday morning has made for a very busy summer. Plus, it's one thing to spend a bit of time with someone whom you've barely met on a playdate. It's another to spend an entire afternoon with them. And while G's mom and I have the South-American connection, how would the hubby fare with G's dad, who is also Venezuelan? Still, in spite of wanting to cancel the playdate, we made our way to the zoo.
We were supposed to meet at 1pm, but with coming back from PK's swimming class and getting our act together, we didn't leave until 1pm. Fortunately, neither did G and his parents. I got a chuckle out of the fact that his mom texted me saying that the tardiness on both sides could be attributed to a combination of our South American blood and having to get a kid out of the house. This was definitely a good sign.
When we finally did meet up, we had a blast. PK had fun seeing G again. She was already pretty excited to see him to begin with. The two played like they were best buds. PK wanted to do everything that G did. They chased each other around, climbed on rocks, and shared toys. PK also loved holding hands with him (though PK loves holding hands with practically any kid). While he was a bit iffy on the hand-holding at first, they got all kissy and huggy later. At one point, G took PK's hand, and together they walked up to an ice cream stand and ordered some ice cream. As parents, we had no choice but to oblige. Okay, we had a choice, but seriously...it was impossible to not cave, in light of the cuteness of the moment. 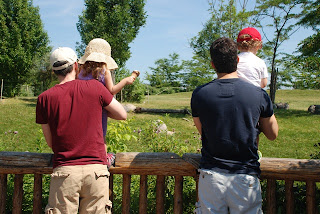 We ended up spending 4 hours at the zoo together. We saw tons of animals, got in a few carousel rides, had Beavertails (the one thing that I miss most about Ottawa), and chased after the kids a lot. And no trip to the zoo would be complete without photos. I opted to leave the DSLR at home, as I would've gotten way too absorbed in my photography and less in the family fun stuff. Still, our little point-and-shoot takes some decent outdoor photos, and I got a bunch of memorable snapshots.
Not a bad Saturday borne out of a weird chance meeting on the subway!
Posted by IndyComp0T1 at 9:58 AM