We took PK rock climbing for the first time nearly two weeks ago. Back in the day, the hubby and I were avid climbers. When the hubby and I first met, I was climbing once a week with friends, and I persuaded him to come along with us one day. He must've really liked me, because he came along, in spite of his reservations about this seemingly suicidal hobby of mine. Then it turns out that he really liked rock climbing, so he became my climbing partner.

The hubby first asked me out at the parking lot where we used to park our respective cars before going to the climbing gym. He proposed in that very same lot. The lot is now occupied by a condo, but that plot of land will always have special meaning for us. We continued climbing up until I became pregnant with PK.

I really missed climbing during my pregnancy, and was itching to get back into it. I dreamed of the day when we would be able to take PK climbing with us. I already saw myself planning her 5th birthday party at the climbing gym (the earliest age at which most climbing gyms seem to let you host climbing parties for kiddies). After PK was born, the hubby and I hit the climbing gym a couple of times. It was great being back, but it was tough to justify going climbing when we had a few short hours to ourselves thanks to Grandparent Babysitting Services. So we stopped. We were sad to do it, but time was precious, and we wanted to make the most of it.

Still, rock climbing was at the back of our minds. We were itching to get back into it. A few weeks ago, I decided to check out the site for a climbing gym that opened up close to our place about 3 years ago. I wanted to see if they had any kiddie stuff that we could do. And they DID! It turned out that they have a TON of kids' programs - lessons, camps, parties, and even an all-ages family drop-in time. I was excited when I told the hubby about it. He was excited too. We pitched the idea to PK, who seemed to like the idea of going climbing (we'd been talking about taking her climbing someday for a while now).

It seemed like a good time to go. PK is a daredevil. Seriously. We pass the park on our way home from school, and she's always got something that she wants to show us. Usually that something involves doing daring stunts on the play structure. Stuff that makes my heart palpitate and that would give my mom a heart attack. And she doesn't care about falling. She once took a spill in the playground whereby she ended up with a nasty scrape by her right eye. She didn't even seem to care that she had this scrape, and kept on doing her crazy stunts. It has since healed, but she still has a bit of a scar there. She is also a speed demon. She has no qualms about riding her scooter super-fast. The faster, the better. She was ready to go to the climbing gym.

The gym we went to was pretty cool. Their focus is more on bouldering, though they have top-rope/lead climbing routes too. They have a whole kids' area at the back. There's a little wall which, once you get to the top, you can take a slide down. The slide is short, but man, does it have punch (yes, I've tried it too). PK was excited to be in the gym, but then started fussing over the climbing shoes (I can't believe that they actually rented out kiddie shoes! :D), refusing to wear them. She got over it after I uttered some threat about not climbing.

Then we got to the wall. She was a bit hesitant. But one of my friends was there with her almost-four-year-old too, and he was already zipping up the wall and down the slide like a pro. It was enough to get PK into the spirit of things, and next thing we knew, PK was climbing like there was nothing to it. The kid is a natural. Her climbing is very fluid, and it is absolutely wonderful to watch. I love how excited she was about climbing. She just kept going and going and going. The best part was that the more she did it, the more confident she became. And the more she was amenable to trying new things. The hubby and I also got to do some climbing, taking turns bouldering while the other one watched PK.

I can't even describe how giddy it made me feel to be able to go climbing as a family. It was definitely one of my favorite times of the three of us hanging out. Something that we could all do and enjoy together.

We took PK climbing again last week, and she was just as much into it. In fact, she looked forward to it. And we're going again on Sunday, Mother's Day. For me, it's the best Mother's Day present ever. Being able to share something like rock climbing with my daughter. Rock climbing holds so many fond memories for the hubby and me, and I'm glad that we can extend those memories to include our daughter. 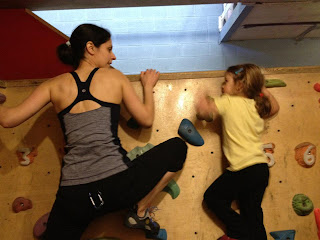