PK looooooooves princesses. Really. And no matter what I've done to discourage the whole princess thing, she is still a fan. Rapunzel is a big favorite, along with Cinderalla and Sleeping Beauty. And let's not forget Ariel and Tiana. The whole lot of Disney princesses. And with the princess obsession comes the dress obsession. Pants won't do. And most definitely not jeans. Jeans are like a four-letter word around here.

For a while there, however, the hubby actually managed to convince PK to wear jeans by having her wear "cozy pants" (i.e. leggings) underneath. Even with that setup, there were only three pairs of jeans that PK would actually wear: "cozy jeans" (i.e. skinny jeans with an elastic waistband and no button), "awesome jeans" (they had a ladybug and some other funky embroidery on them), and "butterfly jeans" (they had a butterfly on them, as the name suggests). But now the weather is nice, and it's all about dresses and skirts. I have a feeling that shorts in the summer will be as much of a struggle as pants were in the fall/winter.

In some ways, we have caved a bit to the princess thing. I am still vehemently against "princess culture" and all of its trappings. I am still convinced that girls with a princess complex end up as bitchy bridezillas and drive their future spouses to the brink of insanity. That aside, I have learned in my journey as the parent of a pre-school-aged girl that taking all princessy things away will probably cause PK to harbor some resentment and start doing things behind my back. So I have let up a little, and have let her indulge in this princess obsession to a certain extent.

Of course, there's a silver lining to this whole princess thing. We have pizza and movie night every Friday night, PK-centered, of course. PK usually picks from her list of favorites: "The Princess Diaries", "Cinderella", "The Little Mermaid", "The Care Bears Movie II", etc. You get the drift. After watching these same types of movies over and over, I got a little desperate. So I told her that one day, she might like to watch the "Star Wars" movies, because there's a princess in "Star Wars". She seemed interested, but I didn't really push it that much. Then a few weeks later, she declared to us that for movie night, she wanted to watch "Star Wars". But where oh where to begin? Classic "Star Wars", or the "new" trilogy? We ultimately narrowed it down to Episode 1 and Episode 6, both of which are probably the more kid-friendly in the series. We ended up going with Episode 6, and it was a total hit. I was actually surprised. She was really into the story and the characters. Darth Vader and Yoda made the biggest impression on her. Yoda in particular. It was quite funny to see her reaction to the movie, because it's so different from anything that she's ever seen before.

We decided to see how she'd react to other movies, so we showed her Episode 5, 1, 4, 2, and 3. We were surprised to find that she pretty much liked all of the movies, with Episodes 6 and 5 being her favorites (she seems to be really fascinated by Darth Vader taking off his mask, and by Darth Vader cutting off Luke's hand). For an almost four-year-old, I am impressed by the fact that she really grasps the storyline and how the two trilogies fit in together. No small feat for a little kid.

With all of this "Star Wars" talk, we were surprised to realize that, boys are to "Star Wars", as girls are to princesses. And just as girls seem to know about all of the princesses without ever having watched a single princess movie (e.g. PK knows about Tinkerbell, but never watched "Peter Pan"), boys know all about "Star Wars" without having watched a single movie. And that most boys this age haven't watched any of the movies. It's kind of funny how these things work. You never really know until you're right in the middle of it.

Anyway, "Star Wars" has been great. It sure got us out of Princessland, at least temporarily. It also makes me happy to know that PK can go against the grain and like something that is traditionally associated with little boys, while still being a girlie girl and liking her princesses. Maybe next up is "Star Trek". That might be a harder sell. For now, I leave you with PK's lovely artwork, "Star Wars Smoothie Family", featuring (left to right): Yoda, Leia, Luke, and Darth Vader, each enjoying a nice smoothie (in red). Peace out. 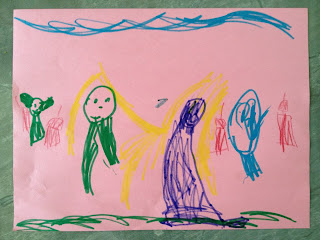